skip to main | skip to sidebar

About a jillion years ago, when I was just about to graduate from high school, I made a last-minute decision. Just weeks before graduation, I decided I didn't want to go to the Ron Bailey School of Broadcasting. I wanted to go to UNC.

I'm no brainiac, but I think that was a pretty good move. And as I mentioned, it was very last-minute.

Times have changed. Apparently future potential collegians get started scoping out college possibilities long before I did back in the dark ages.

My oldest son Connor will be graduating from high school next year. That makes him a junior.

Real-live mail isn't dead. It apparently comes in the form of brochures and informational packets from colleges hungry for fresh brains. Here's the pile of mail Connor's received so far: 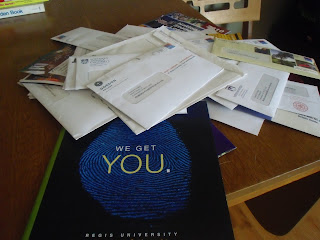 I don't know if you can grasp how large this pile of mail from colleges is, and the envelopes are, for the most part, unopened. Many will probably stay that way, at least for a while.

I'm thinking Connor's received this rock-star volume of mail because he did well on his PSAT test. He hasn't even taken the SATs yet. Imagine the mail once those results come in.

A lot can change in a year. But all of this mail has most likely been sent in vain.

I'm sure Connor will go to college. It's most likely he'll go somewhere close, in state, unless he gets a whole bunch of scholarship money, grants, loans, winning lottery ticket.

Interesting, that we haven't received one piece of mail offering up methods by which to pay for these institutions of higher education.

Because tuition at UNC is around $13,000 per year. And UNC is among the cheapest colleges in the state. That's a far cry from 1983 tuition, when I graced UNC's halls. Back then, tuition was a fraction of what it is now.

Until decisions are made, we'll continue collecting this mound of mail.

Maybe we'll get a few slick brochures that address how to pay for the high price of higher education.